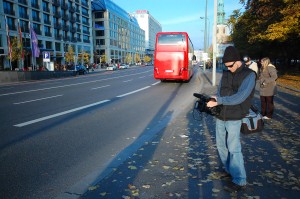 During the late spring of 2007, I traveled to Berlin and Leipzig, Germany with Alleviated recording artist Chad White (a.k.a. “Mr. White”) to capture performance footage for an ongoing project.

In preparation for the journey to Berlin, I met a group of film students from the Deutsche Film und Fersehakadamie Berlin (DFFB) through social networking on MySpace. I was invited to spend an extra two weeks in Berlin to assist the DFFB students on a short film they were producing. In the midst of meeting artists from many creative disciplines and backgrounds, I became curious about their experiences in a country that was divided by the Berlin Wall and the Iron Curtain 19 years ago.

I was amazed at the diversity of the stories that arose from the division, separation, and ultimate reunification of a country where most of these individuals had lived from birth. I found a Germany that had to reinvent itself from the shadows of the past and reconcile its inner divisions. My perception is that music, film, and the arts are a driving force in that reinvention. As an American of German descent, this project is very exciting to me.

My intention is to film and produce a series of documentary essays with artists from various disciplines in order to capture that transcending experience and the excitement of today’s creative energies.

When I first met Eric, and heard about his idea for this project, I was immediately intrigued. From my journalistic perspective, it sounded like a very relevant and interesting topic. As a dancer, I was fascinated by the idea of interviewing artists who lived and worked in a country that seemed so far away. 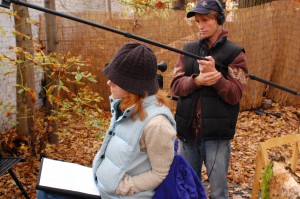 In September 2009, Eric and I took a leap of faith and purchased two plane tickets to Berlin. Meanwhile, we started contacting various artists in the city to schedule interviews.

Just weeks before our October 28 departure date, we still had not secured actual funds for the trip. Eric approached Linn Sitler, Memphis and Shelby County Film Commissioner, and told her about the project. Within days, she had arranged for us to produce and shoot three webisodes in Berlin for the film commission. By actually having a job to do while we were in Berlin, we were able to go on the trip without spending money out of pocket.

Our time in Berlin flew by. We completed 14 interviews in 11 days, attended the amazing celebration of the fall of the Berlin Wall on November 9, and built muscles lugging all of our equipment up and down subway steps.

Although the trip to Berlin was definitely a huge part of this project, it was just the beginning. Since we arrived back in the United States on November 11, we have spent hours editing and promoting the project. Our hope is to return to Berlin in the near future to obtain more footage, so we can finish the project within the year. We are also in the process of raising funding for the return trip and the final phase of editing.